Do you have a NAS at home or in your office and would like to use it with Dropbox? Dropbox’ desktop app unfortunately doesn’t let you use it anywhere outside your local harddrive, let alone a folder on a shared network drive.

This is an abriged translation of my post Tutorial: So richtest du Dropbox auf einem Netzwerkpfad ein. To read it in its original German language, follow this link to the second page of this post.

I tried to use the Dropbox App that was shipped with my WD My Cloud EX 4 (affiliate-link). But unfortunately, this app was not really working. It downloaded my files from Dropbox’ servers but was not able to upload any new files stored in the Dropbox folder on the network storage. So I had to find another solution for using Dropbox on my NAS.

Since I am using Windows in German, the screenshots are in German too. But you’ll probably figure out how to setup Drobox on your NAS even in a foreign language :-)

How to trick Dropbox into using a network drive

When installing the Dropbox desktop app, you’ll quickly notice that it does not allow itself to use a folder on a network drive. Only drives from the local harddrive are allowed to host a Dropbox folder. At the end of this article, you’ll be able to outsmart Dropbox’ installation routine. The only things you will need is a network drive or NAS in any form (obviously), some free hard disk space on your local machine and administrative rights for your Windows machine.

1. Change the drive letter for the target 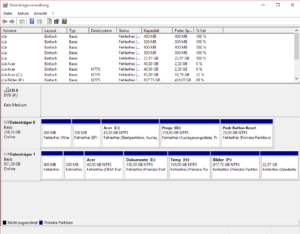 First, create a new partition with Windows’ disk management tool and assign the drive letter N: to it. If there’s already an existing drive N:, you would have to change that letter to something else in advance. If you already have any other drive, where temporarily changing the assigned drive-letter is not too risky, you could change that one to N:. But be warned: You will not be able to change the drive letter of the C:-drive (where usually Windows resides) and any other hidden drives. In case of some Windows bug’s reason you might be able to – you should not do so!

Eventually, you have your drive N:\ (or whatever you chose) ready for setting up your Dropbox.

Second, you will install the Dropbox desktop app. Choose the drive letter you created in the first step as target and let the Installer do its work. Upon completion of the installation, the Dropbox app will ask you for login credentials or to create a new account. Go ahead, log in and let the magic happen.

As soon as the Dropbox app is ready, close it. There’s no need to download all you files at this moment. So skip that process and make sure that Dropbox is not running anymore. Check for its icon in the taskbar next to Windows’ clock – if it’s still there, right click and close Dropbox. It is essential for the next step, that Dropbox is not running in background! To be safe, you could also check Windows’ task manager for any process named Dropbox and close it the hard way.

3. Change back drive letters and connect as network drive

Third, you return to Windows’ disk management tool and re-assign the drive’s original letters. If that’s not possible at this moment, reboot your machine. But remember to close the Dropbox app again, after rebooting. Usually, it will automatically load on Windows startup. 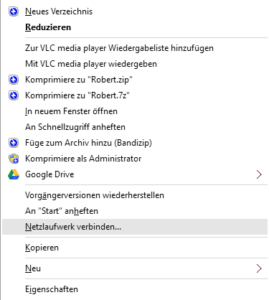 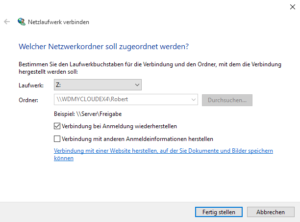 Important: You should activate the checkbox to “reconnect this drive upon login” (or whatever it says in English). This way, Windows will always try reconnect this folder as the drive upon startup when it is available.

When your NAS is not available

While you’re on holiday using your laptop, or in case you switched off your NAS on purpose, it will not be available for Windows to connect to. Obviously, the Dropbox app will not run properly then. It will tell you, that it cannot find its folder and asks you to choose another folder to use as local Dropbox copy. But you do not want to do that. Just hit “abort” and everything is fine :)

You won’t be able to use Dropbox’ local files when your not in you local network. But you could still use
Dropbox’ website to download indiviudal files.

We use cookies to ensure that we give you the best experience on our website. If you continue to use this site we will assume that you are happy with it.Ok